Where to begin?! How to plan a party where the ideas were endless? As soon as I thought of one
thing to add, another would pop up, leading me down the rabbit hole of ideas. It was almost to the
point that I had to stop myself before my head exploded! Talk about whimsical — this was whimsy
on steroids! It helped to have a creative client who worked with me hand in hand during the whole
creative process. I loved working with this theme, and the client! 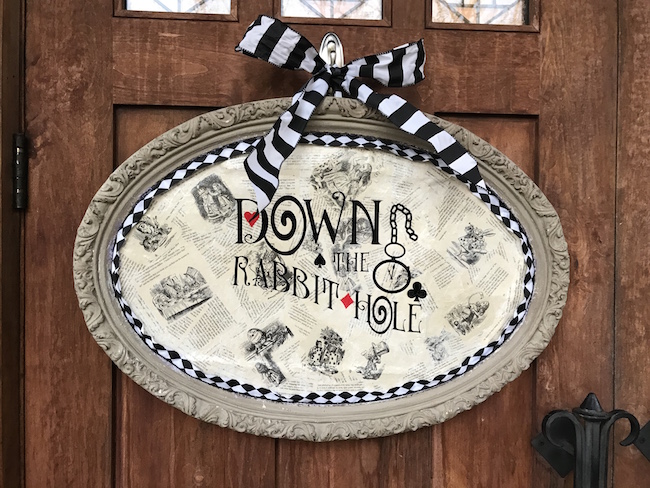 As guests arrived at Farmington Gardens lining the pathway outside were oversized playing cards
in potted trees, dressed up with playful ribbons. 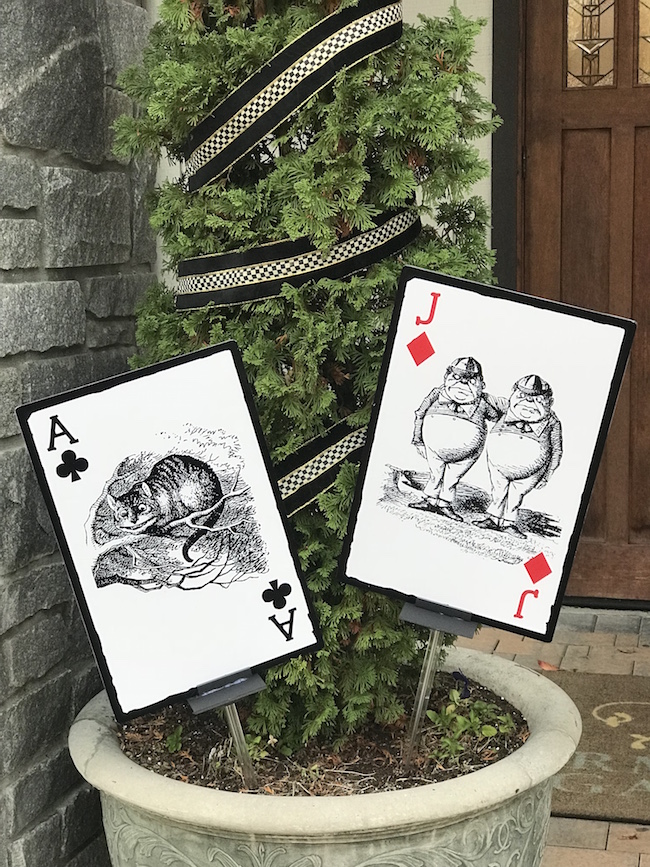 The entrance door displayed a welcome sign and beautiful flowers by Pentimento Flowers. 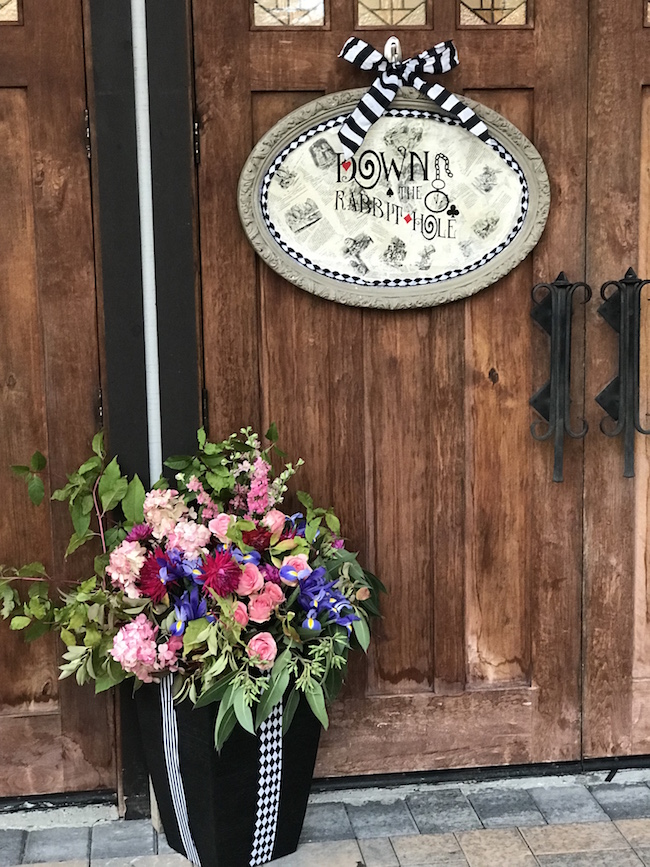 As guests stepped into the lobby they were greeted with an array of design elements made just
for this special occasion. They were transported to Wonderland! There was a giant striped sign
that displayed the logo specially created for the guest of honor.

The place card table was in front of the sign, which featured a little chalkboard placard saying,
“Take Me.” 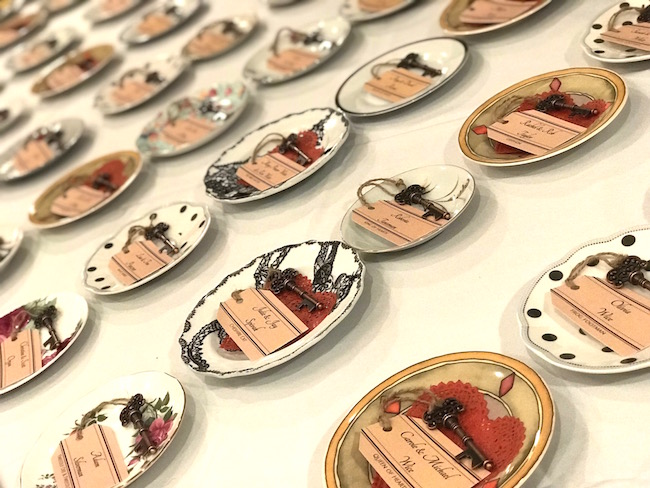 The adult place cards were presented on mismatched teacup saucers, some of which had
heart-shaped doilies for good luck. 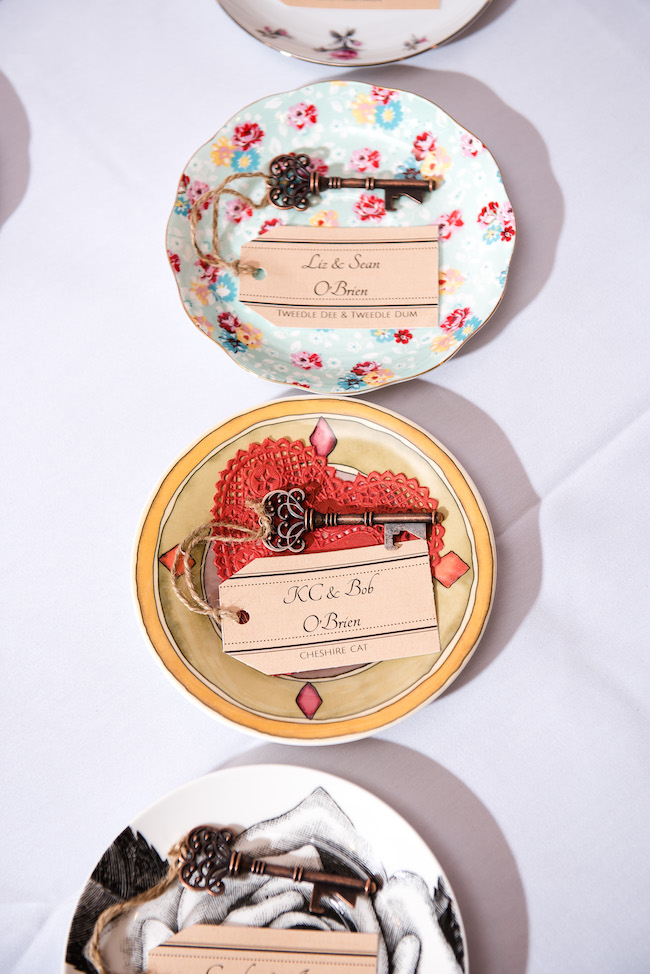 Each place card had a key which doubled as a bottle opener with a tag attached listing each adult’s
table assignment for the evening. 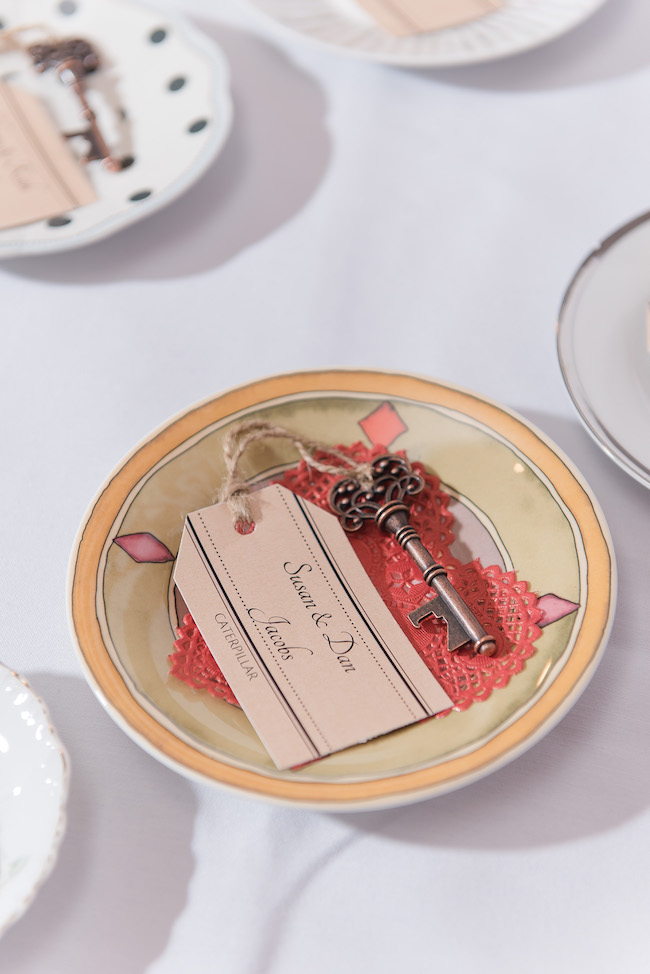 The young adults had a special sign listing each guest’s name which pointed to their spot at the
‘Mad Hatter’s Tea Party.’ 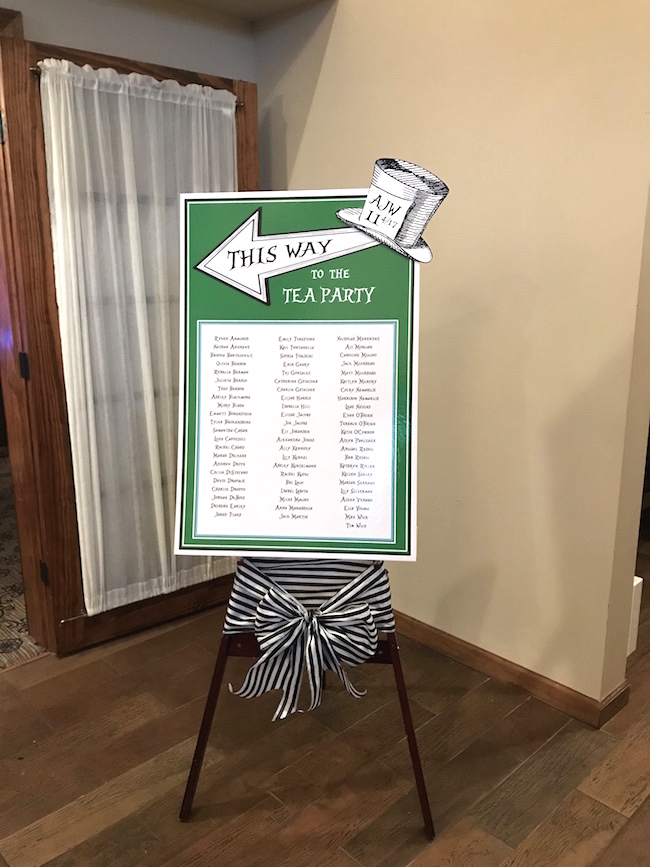 Placed throughout the venue were little chalkboard signs with, ‘suggestions.’ In addition to the
adult place card table, there were mini signs saying, “Eat Me” on the butlered hors-d’oeuvres
trays and on a table with yummy apps during cocktail hour. 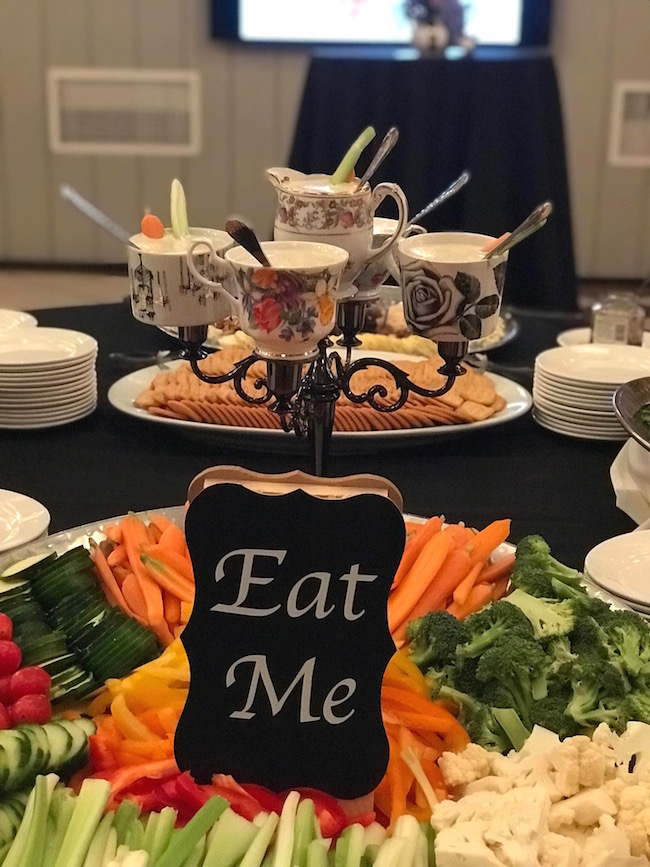 And, of course, a little reminder at the bar. 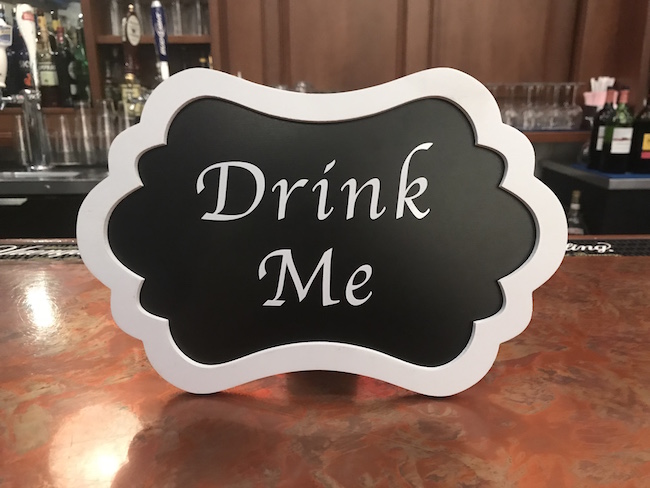 There was a birdhouse transformed with decorative ribbon and a mini Alice doll for guests to
leave cards for the bat mitzvah girl. 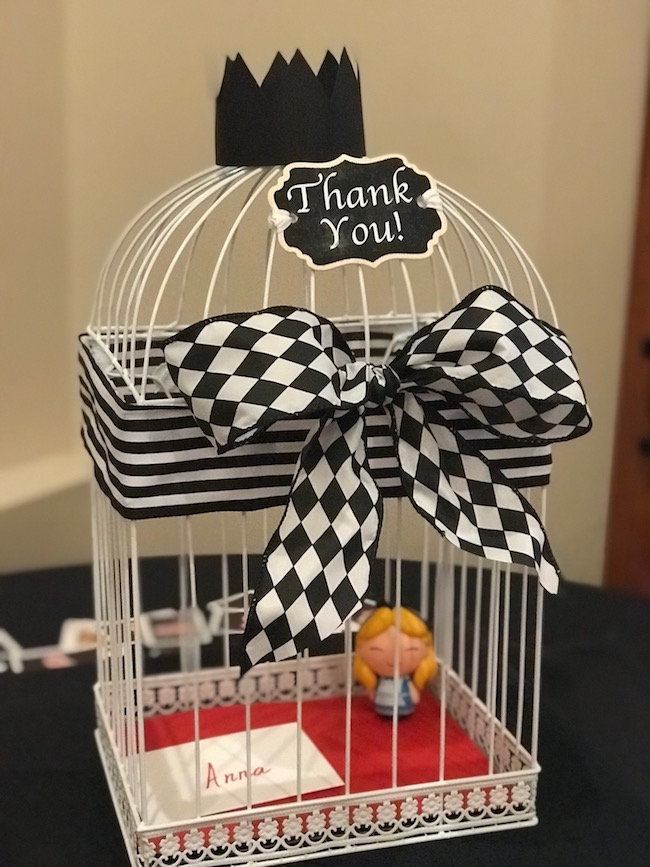 The adult cocktail hour was held in the Greenhouse. The tables were decorated with flower
arrangements in teapots and giant teacups. 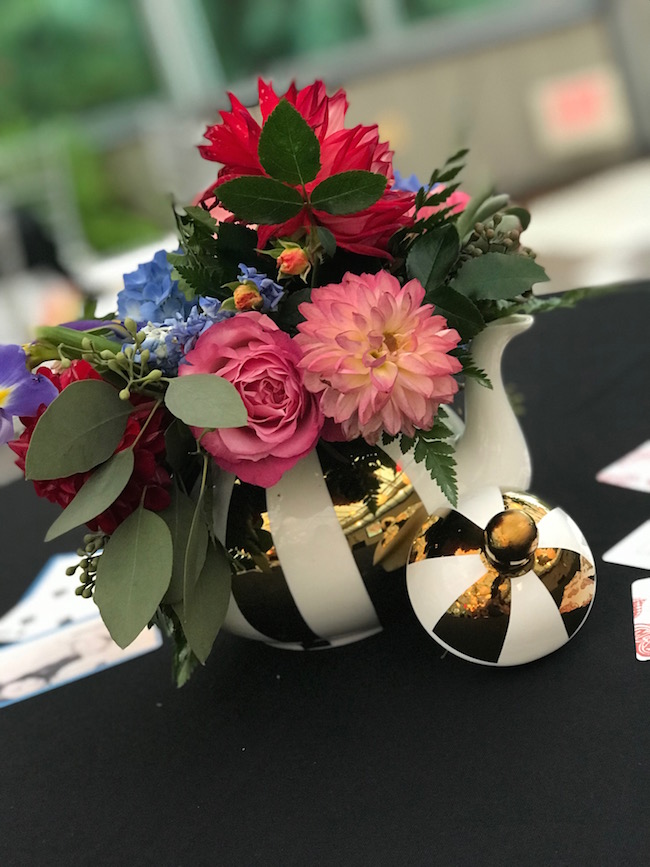 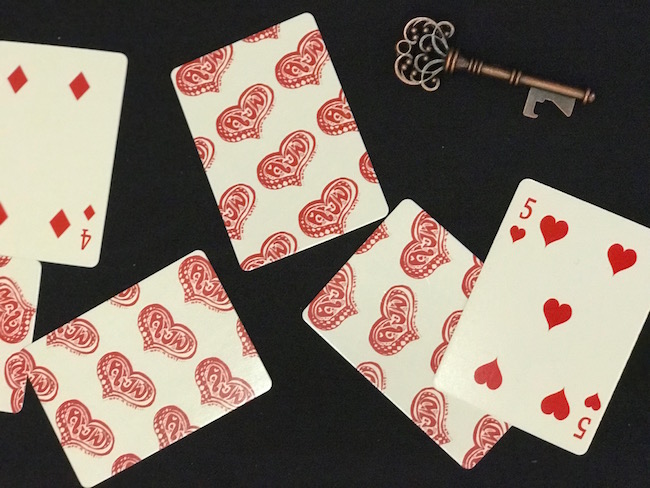 The adult tables were adorned with characters from the Lewis Carol book, “Alice in Wonderland,”
made to look like giant playing cards. 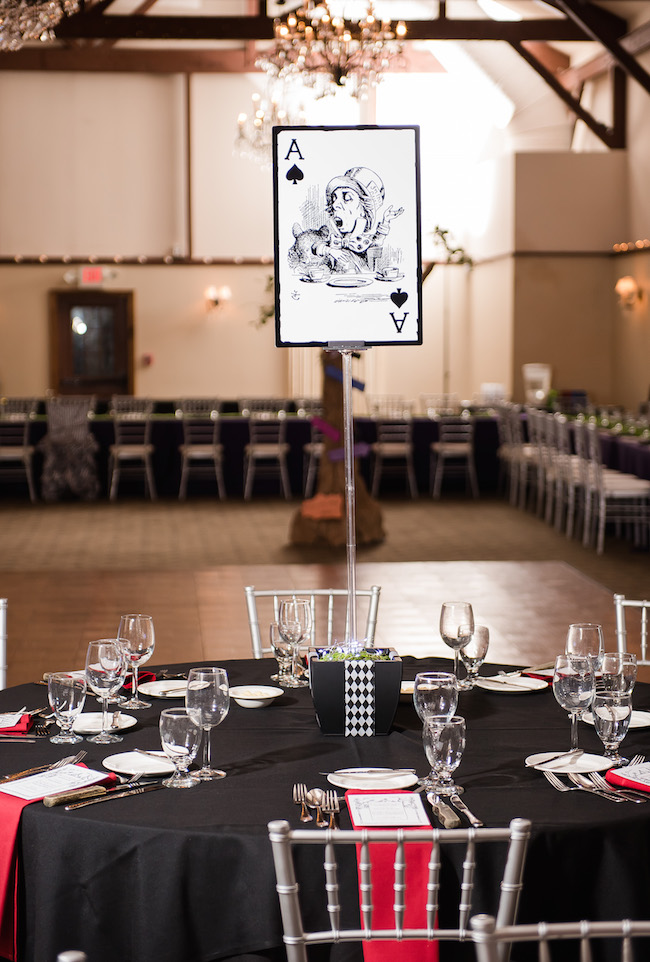 The other side of the centerpiece topper was Anna’s logo which looked like the back of a deck of
cards. 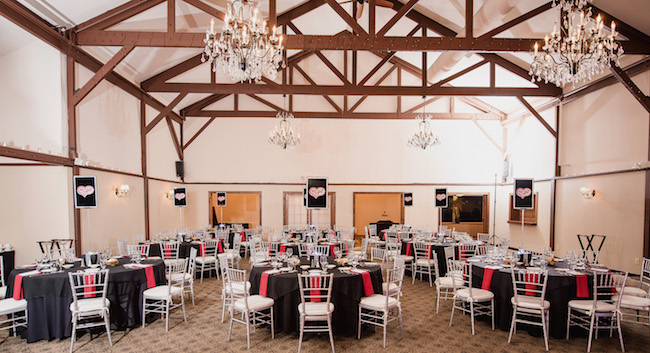 The bases of the centerpieces were adorned with black-and-white striped and harlequin ribbons;
while the inside showed overflowing fairy lights and green moss. 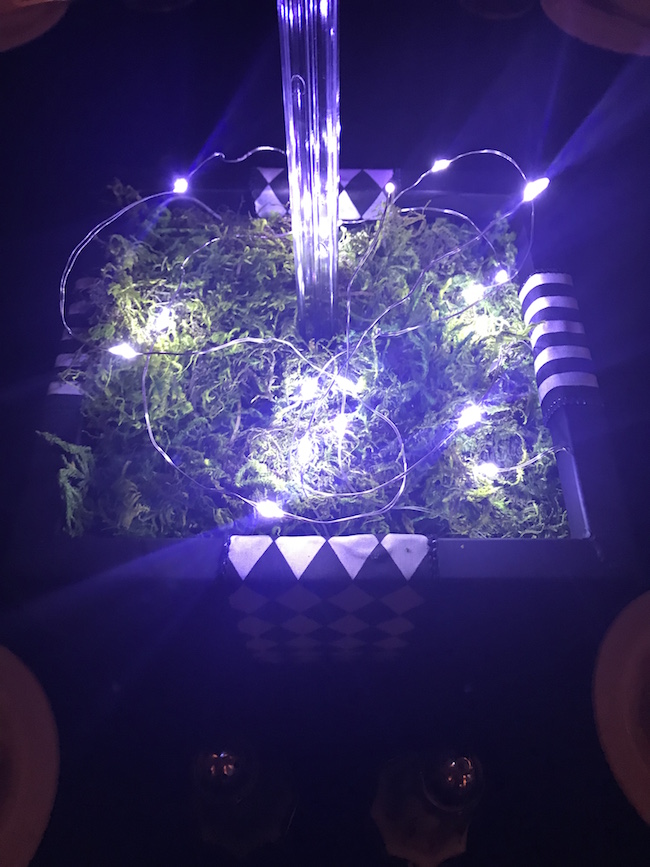 Even the adult menus matched the theme and added a little more whimsy to the table. 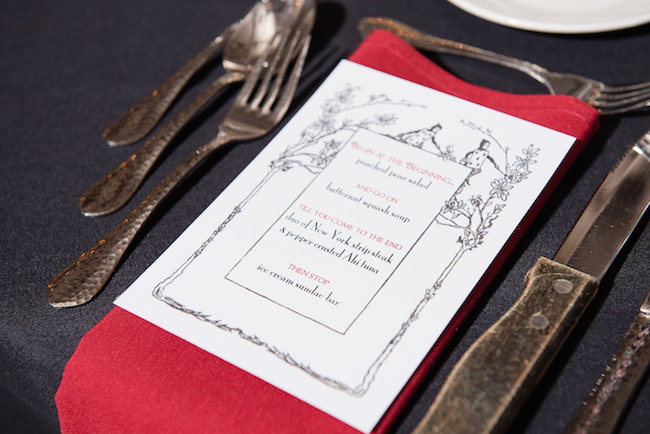 In the ‘Mad Hatter’s Tea Party’ area, the tables were dressed in purple linen with green turf and
the food was displayed in creatively made teacup candelabras. 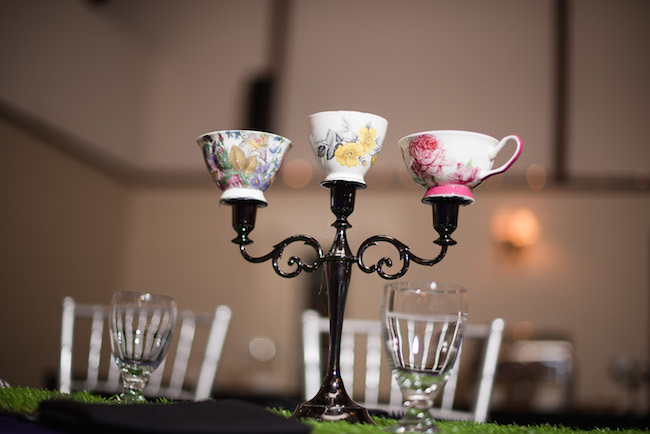 A fantastic decor element made by the bat mitzvah girl’s grandfather was prominently displayed
in the ballroom. It was a giant tree with directional signs, a photo of the guest of honor, and the
smiling Cheshire Cat on top. 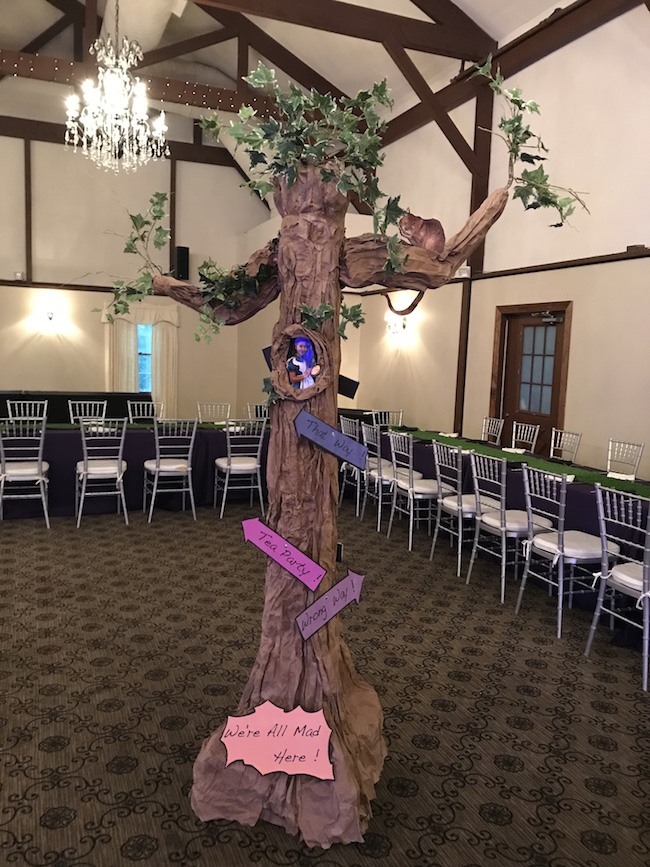 There was a chess game of giant proportions. 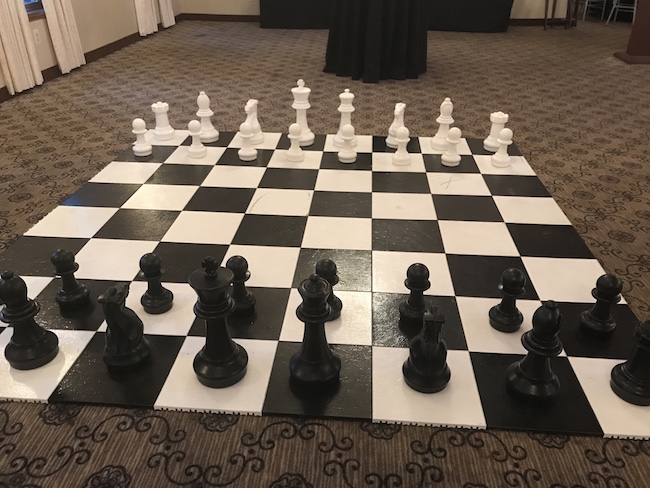 And a real set along with checkers on some tables for those who wished to play. 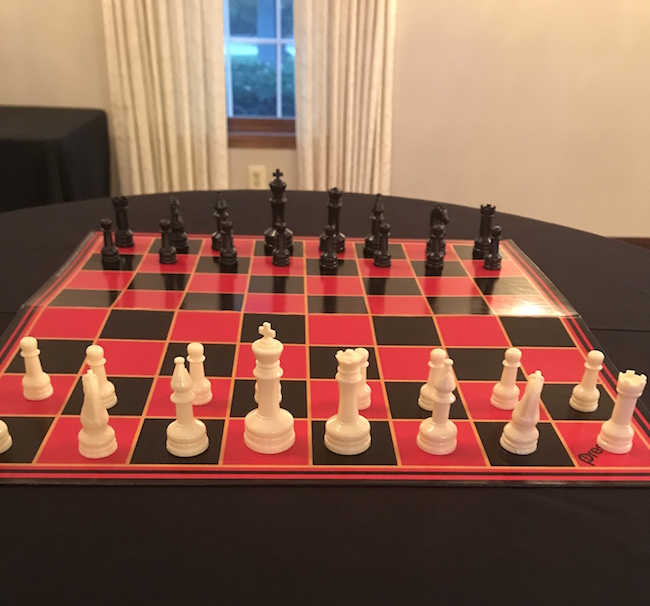 As guests danced the night away they kicked off their shoes and put on cute heart-decorated
socks displayed in a basket resembling the, “Rabbit.” 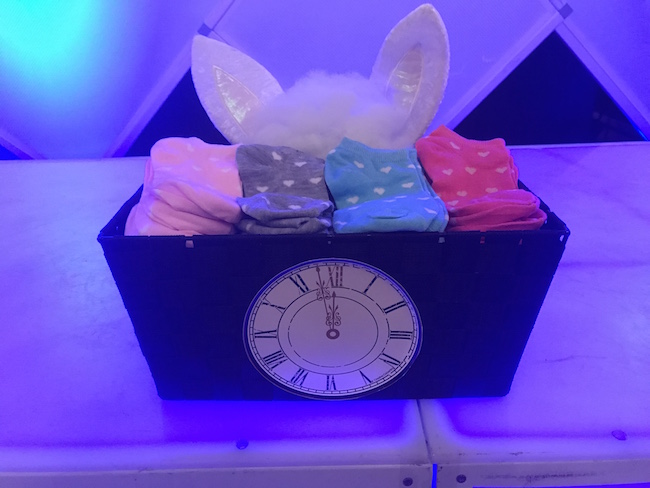 Always a special moment is the candle lighting ceremony. A perfect piece made of teapots,
teacups and, “ANNA” in lights, and family candlesticks with striped candles completed the look. 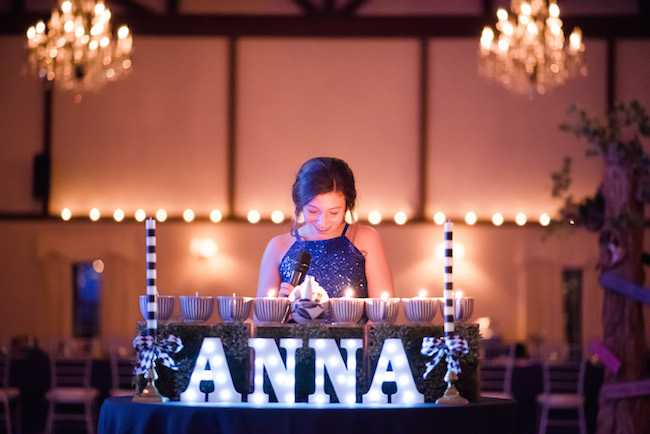 The most beautiful cake was made by Harvest Cafe which included so many perfect elements
from the story of, “Anna in Wonderland.” 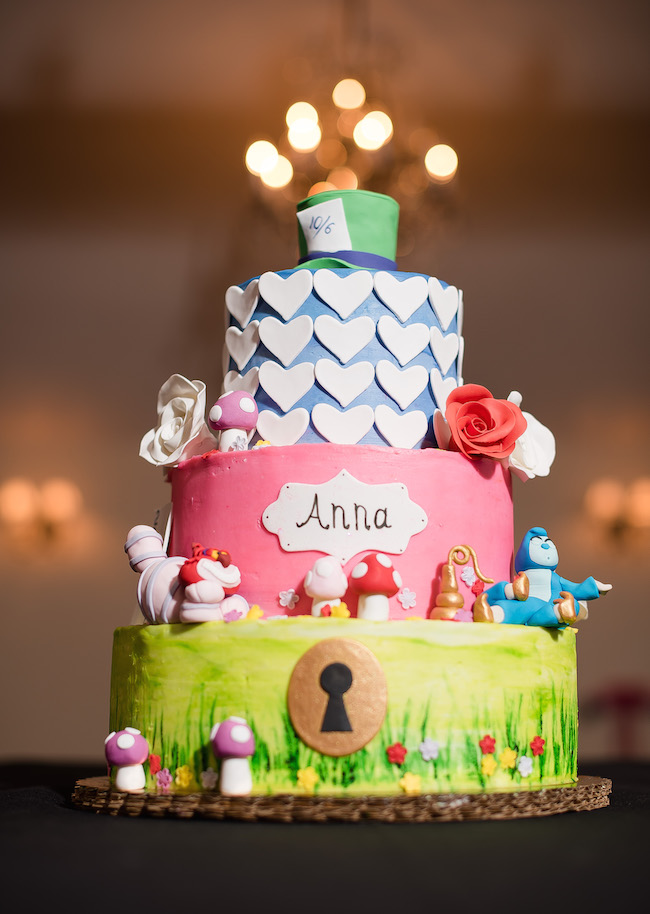 A, “Looking Glass” was used as the sign-in board so attendees could leave a note for the guest of
honor. A removable sign was attached so the mirror could be reused after the event. 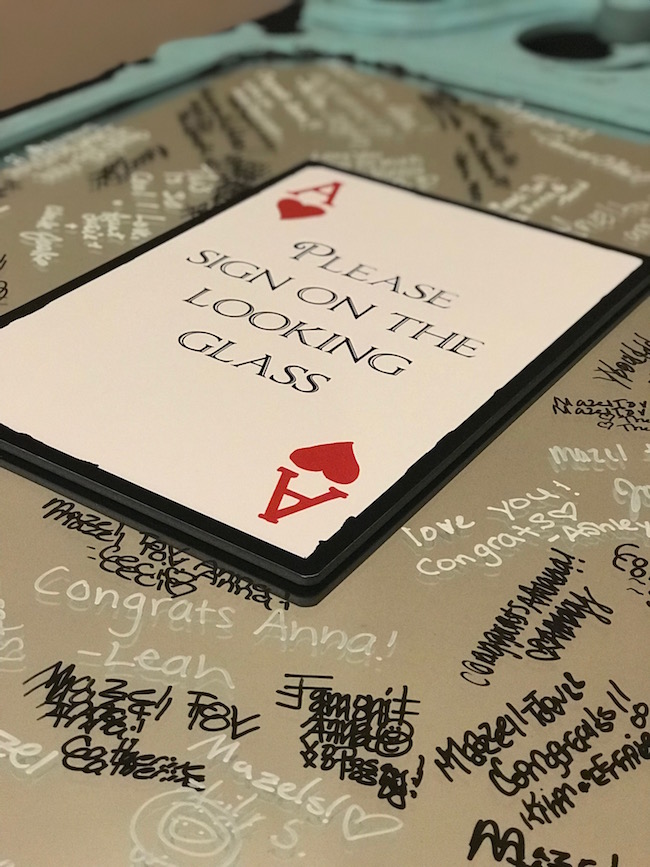 Special long-sleeved shirts were designed for the young adults as a keepsake and were there for
the taking as they exited “wonderland.” 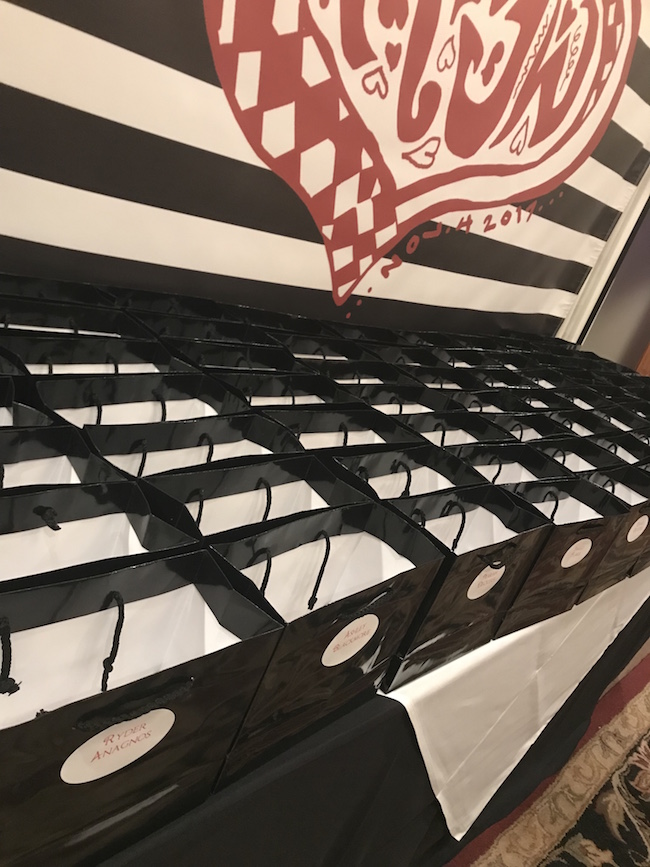 Plan-it Vicki is the brainchild of Vicki Ross, an experienced Event Planner located in Avon, a suburb of Hartford, Connecticut. Vicki has created wonderful celebrations all over Connecticut, New York, and Massachusetts. She and her staff provide services for small, intimate dinner parties as well as weddings, and bar and bat mitzvahs.